Home » About Us » Board of Directors

Alan is the Founder and President of Alma. He is a Director and Portfolio Manager at ScotiaMcLeod where he has managed socially and environmentally responsible portfolios since 1987. Alan started his first charity at the age of 27 and has shown a weakness for founding social purpose organizations since then. He has held senior roles in a variety of civil society initiatives and has sat on several charity boards, most recently Variety Village, Bereaved Families of Ontario and Small Change Fund.

Wade Davis is an acclaimed writer, photographer and filmmaker whose work has taken him from the Amazon to Tibet, Africa to Australia, Polynesia to the Arctic. Author of 23 books, he holds degrees in anthropology and biology, and received his PhD in ethnobotany, all from Harvard University. Wade was Explorer-in-Residence at the National Geographic Society from 2000 to 2013, and was made a Member of the Order of Canada in 2016. He is currently a professor of anthropology and the BC Leadership Chair in Cultures and Ecosystems at Risk at the University of British Columbia. Wade is an expert in the intersection of civil society work and indigenous cultures and thus is an invaluable asset to Alma.

Anatol von Hahn is the former Group Head, Canadian Banking, at Scotiabank. Anatol was born in Chile and has lived and worked in several Latin American countries. He has held various senior positions in both Canadian and International banking at Scotiabank. Anatol has been involved in several charitable initiatives dating back to his University days and currently sits on the board of Ronald McDonald House and UNICEF.

Sandy is the President of the Metcalf Foundation, a leading private Toronto-based foundation focused on sustainability, creativity and social justice. Sandy has a background in law and mediation and has worked as a consultant and advisor in the private, public and not-for-profit sectors. As a volunteer Sandy has served on numerous boards and committees and was the founding Chair of the Friends of the Greenbelt Foundation.

Rob Djurfeldt is the Managing Director, Head of ScotiaMcLeod. Previously, he managed Scotiabank’s brokerage operations in Mexico. He has lived in several South American countries and shares our passion for the welfare of children in those countries. Rob and his sons have visited our projects in Peru in each of the past three years.

Michael is a senior executive at Flybits. Previously he was the Director of Software Solutions at Hewlett Packard. He has held senior management roles in Fortune 500 software companies for 25 years. In the not-for-profit world, Michael worked for TV Ontario and The Art Gallery of Ontario.

Trevor is a Senior Wealth Advisor at Genuity. After visiting our remote communities in 2013, and witnessing our work, Trevor began fundraising and organizing events for Alma. Trevor is a devoted father to his two children Jason and Megan and enjoys spending time at the cottage in Honey Harbour with his dogs Manhattan and Rio in tow.

Ana Maria is a real estate consultant and former Director for Retail Investment Products at  Scotiabank. Ana Maria managing all of the Alma partner projects and created the “Alma kids” program. She has two young children and is passionate about providing youth with fair opportunities for quality education, particularly in the poorest areas of her home country.

Dan is Head of Compliance at Scotiawealth. Previously Dan has held a variety of senior roles at Scotiabank and CIBC and was a partner at Torys LLP. Dan is also on the board of Alma Foundation Peru and Dixon Neighbourhood Homes. His previous not-for-profit participation includes Chair of Board at Dixon Hall Neighbourhood Services, board member at Parkdale Community Legal Services and volunteer with Big Brothers and Covenant House.

About us side menu 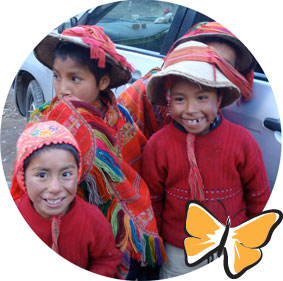