Only 4% of children with disabilities in Cusco receive a formal education. Manos Unidas is a registered Peruvian Non-Profit Organization that founded the first and only private/non-for-profit school for Special Education in Cusco, el “Centro de Educacion Basica Especial Particular “Camino Nuevo” in 2009.

Manos Unida’s mission is to maximize the abilities and potential of individuals with intellectual disabilities through a humanistic, personalized education with clear attainable goals and strict follow up, honouring such principals as respect, justice and tolerance for all community members.

Manos Unidas has supported over 150 children and young adults with Autism, Down Syndrome, Cerebral Palsy and other intellectual differences between 3 and 25 years of age within one of their 5 programs: 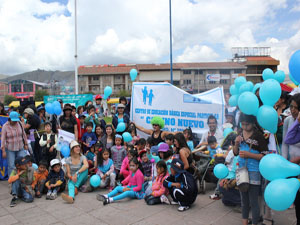 Edher is 9 years old and included into the third-grade classroom at I.E. Andres Alvarino Caceres in the district of Zarsuela in Cusco, Peru. This is Edher’s second year being included in a regular education school after attending CEBEP “Camino Nuevo” for 2 years. (Cusco’s only private/non- profit school for special education.)

Edher’s mother was very young when he was born. After several unsuccessful attempts to try and abort her child, her son was born with mild brain damage known as cerebral palsy. Edher has spent most of his life running around the streets of Cusco under the care of his grandmother who has a food kiosk outside of the government hospital. His mother has left him in the care of her family members for many years as she looks for work in cities far from Cusco. His primary caretaker is now his 20-year-old aunt who has assumed his responsibility and taken on roles of motherhood very early in life. In attempts to support the family, we have hired Edher’s aunt to work with us at Camino Nuevo in order to encourage her into a professional field. She is now studying psychology in Cusco and works part time in our severe disabilities classroom.

Edher has an amazing success story of a child being included in regular education. Children like Edher deserve to study along same aged peers and develop healthy friendships without having to be isolated from society, which is what most special education centres continue to do. Camino Nuevo teacher, Yuneli Lovaton, has been working with Edher and 4 more classmates at Zarsuela school for 2 consecutive years and has been able to report incredible success. Edher has buddies who play soccer with him at recess, his academic achievements have risen to a second grade level in reading and writing, and his emotional maturity is that of a 9-year-old. He even takes the bus by himself to school daily.