Home » From the Field » A hail storm in Karhuacalla

I was in Karhuacalla yesterday for our final dia de logro (achievement day) with the parents of Karhuacalla, where we have a primary school biblioteca project. The students had finished presenting what they had learned throughout the year, and we were reviewing the last four of the 28 digital portfolios that we create for each student. Then the sky fell down.

We had lost electricity about an hour earlier, so instead of projecting the portfolios we all had to huddle around the computer screen (24 parents, our 2 Alma teachers, our Project Coordinator, and myself!), which was not ideal. The parents were getting a little nervous about the oncoming rain, but were also relieved that their potato and corn crops were finally going to get some much needed water. As I mentioned, the sky then fell down.

The rain turned from a light drizzle to a hail storm, with an intensity I have never seen before, in an instant! Less than an instant. As we were reviewing one student’s understanding of fractions at the time it happened, I’d estimate 1/8th of an instant.

Hail poured down on the tin roof making conversation impossible. Lightning bolts hit the mountains continuously all around us. The parents immediately stood up and demanded that we turn off the computer and our cell phones, for fear of drawing a lighting strike.

We all huddled in the dark classroom provided to Alma by the community and watched as the hail and lighting fell, thunder and hail filling all sound. Watching the nervous faces of the mothers and fathers gathered there, worrying for their crops as the hail fell heavily on fragile leaves, I was struck by how close agricultural people must rely on nature. They are always paying attention – looking at the clouds, the moon, an odd shadow, or a halo of light, as a sign of what nature will bring.

It is humbling. When the Pachamama decides it’s her turn to speak, we all listen. 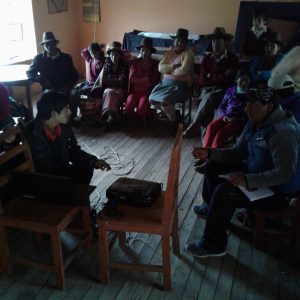