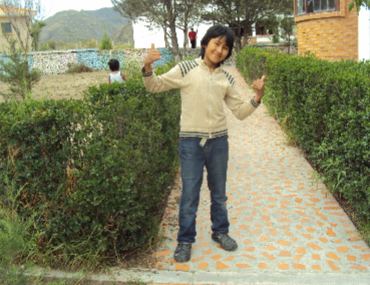 My name is Daniel, my parents are Antonio Marco and my mother is Sandra Loayza Coronel. They are 50 and 45 years old. I also have a brother named James who I get along with very well. I love him. He is older than me so he stays in the Equino home and is in the fourth stage of the program.

When I was one year old, my mom left to my father who drank a lot and did not look after me. He then left me with my grandfather whose name was Gonzalo Hanover. I lived very well during the time I lived with them, but once I turned 7 years old, my mom came and picked me up. I did not want to go with her, I was fine with my grandfather because he wanted us and we did what we needed.

Once my mom brought me home, she forced me to clean all the time and did not let me sleep on the bed, but instead on the floor next to my brother James. She often did not give us food, and when we were given only leftovers she would scream at us. She always hit me with a stick and told me that I am not allowed to die or because I am not allowed to go.

So in 2011 I left I my house, I have been on the street for a while when I was brought to the home of Jose Soria. I did not like the home but it was better than my mom. Then, I do not know why but I was moved to the “Home of Hope”. It was here that my mom found me and took me back.

When I returned home it was the same thing as before, although she had said she the abuse would no longer happen, she hit me and did not give me food. They were angrier because I had gone to the street before. Then as I could not take any more, I escaped again. I went to the street, the street was very difficult. Here the police grabbed me and led me to a temporary home. There was a psychologist to see me and asked me if I wanted to go to a children’s home instead of the street. She told me the home of Alalay was nice and children were treated well.  They told me I could be in Alalay and I was happy, though at first I was scared and did not know anyone. When I arrived they made me walk all over the place, I was given some small toys for my bed and they introduced me to all of the boys and educators. They have all been good to me.

When I entered the home, I liked the trees, the flowers, the cabins. I felt better and quieter; here they gave me everything I need from the beginning.

When I was with my parents, I did not go to school. They took me out of school, telling me that it was a waste of time because I needed to work to make money for the house.  Now that I am in the home, we go to school, we also do tasks together and they have people to help us learn. We also have study hall and do activities to improve our performance in school with a teacher at the home. It is good and helps us patiently.

I want to study to be a doctor because I want to cure children living on the streets, my favorite subject is language.

My friends share with me everything they have, they lend me their toys and I play with them. “They are now my family” and I’m happy that my brother and I have a new opportunity to be happy.