Home » From the Field » Meet Edison from Sariry 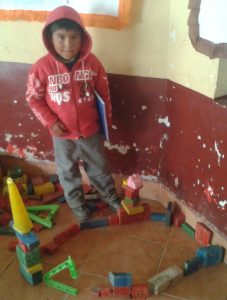 Edison is a 5 year old boy in the first grade of school. He comes from a family which is separated. His father works in the department of Cochabamba and his mother is in Brazil. Because of this, Edison and his three brothers live with their aunt.

Edison entered Sariry with malnutrition. Now, he has the appropriate level of nutrition for a child his age. In the first weeks attending Sariry, he presented aggressive behavior towards his companions. We believe this was because of his unstable family situation. However, during his time attending Sariry he has gradually overcome various difficulties, including behavior and emotional skills. He has learned how to relate better with his classmates and the program has improved his self-esteem. Although he is not happy with his family situation, he has shown a great interest in carrying out his school duties and studying. He is happy to participate in the development of activities in the Sariry program like games, talks and workshops.