Meet Melanie (6 years old) and Maribel (7 years old) who are included for their first year in Velasco Astete 2nd grade classroom. Melanie and Maribel both came to Camino Nuevo with little to no verbal speech, very shy immersed in their own worlds. Neither child took notice in the other children or showed interest in interacting with them. When the two girls were placed in the same classroom at Camino Nuevo in 2013, they quickly became friends. Within a few months they were inseparable. They found a way to communicate with each other, play with toys, hold hands and protect one another. We decided to include them into the 2nd grade class in Velasco Astete in 2014. Since their inclusion, both girls have made friends with almost everyone in the classroom, became interested in being independent and sitting with peers in the classroom, receive help from the peers and have excelled in their communication. Melanie now speaks 3-5 word sentences with clear pronunciation and is completing classroom age activities. They are both loved by their classmates. 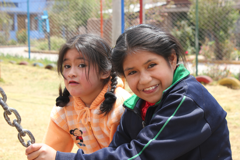