December 2014 not only closed out the year, but also brought to a close some of Alma’s earliest projects. A key piece of our sustainable project policy is to eventually pass the projects off to the communities themselves. Each year, the communities we work in take more and more responsibility for the coordination and administration until we feel the project is stable enough and could be moved to 100% local control. Then we can take our budget somewhere else to ensure that we continue to have as much impact as possible at the same time knowing that the old projects will continue into the future without our help. So how does it look in practice? Here are two examples: 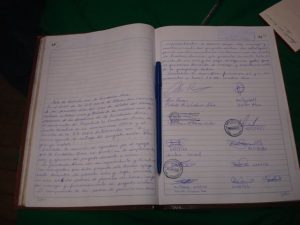 Officially signing over Patacancha to the community.

We began the Patacancha Trout Farm project in 2011. At that time, the primary school rate of chronic malnutrition was 41% and the malnutrition rate was 16.4%. The community decided they wanted to implement trout-based school lunches to improve the nutrition of their children and as a result their academic performance in school. Closing out 2014, the chronic malnutrition rate was 0% and malnutrition was only 3%. Student attentiveness, participation, and lesson retention have all improved. The trout farm is the only farm in its region that produces its own food and hatches its own reproductive trout. Students eat a trout-based lunch 2 to 3 times per week cooked by their mothers on a rotational basis. Surplus trout can be sold to cover the costs of maintaining the trout farm. The project is now self-sustaining, and the Parents’ Association has accepted the responsibility of administering it without the help of Alma.

In early 2012 we were approached by community leaders in Sihua to help them expand their primary school from one teacher for four grades to six teachers for the full six grades. They didn’t want to send their children walking up to three hours to neighbouring towns to study anymore. Closing out 2014, all Sihua primary school students study in their own community, with one teacher for each of the six grades for two years running!

The Ministry of Education has gradually taken over Alma’s budget to permanently open budget for teachers in the community. The increase in the student population from 61 students in 2011 to over 100 in 2014 prompted the district municipality to build the community a new, larger school. The state budget directed at Sihua is permanent, the improved student-to-teacher ratio has improved the academic performance of the students, and all children from Sihua can celebrate their primary school graduation in their own community.

However, not everything is so simple. Although Alma will no longer financially support these projects, we will stay in contact with the communities and monitor their continued success. For example, time will tell how well the Patacancha Parents’ Association administers the trout farm, and Sihua’s parents will need to continue pressuring the Ministry of Education to ensure the ongoing budget is allocated for teachers in their school. We hope that, after several years of working with Alma, the parents are up to the challenge.