Home » From the Field » Sirionó 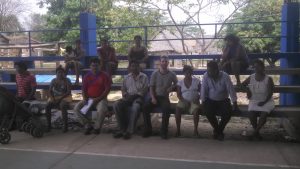 I was in Bolivia last week, in part to check in on two of our new projects in the Bolivian Amazon. We are working with the Sirionó people to create textbooks in their native language, Sirionó, in their primary school in the village of Ibiato and their secondary school in Pata de Aguila.

This year, the students are collecting cultural information, stories, and poems from their parents and older relatives and writing and illustrating them. These will be collected, edited, and printed into textbooks to be used in their Sirionó course from now on.

Though the Sirionós did make contact with the Spanish in the 1690’s, there was no serious effort to evangelize them until the 1960’s, when the mission of Ibiato was founded and the Sirionós were pressured to live there and work the sugarcane fields and rice patties.

While in a meeting with the teachers and parents in Pata de Aguila, many of the women attempted to teach me some Sirionó. When we were saying our goodbyes, everyone said “echuby” (sounds like “eh-choo-beh”). I asked one of the mothers what it meant, and she said it means “come back”. I asked how to respond to the request and she said: simply “say yes,” and everyone had a good laugh.