The President of the Carnegie Corporation recently wrote: “The challenge facing all of us — from Virginia Woolf’s ‘common reader’ to the futurists of Silicon Valley, from pre-K teachers to the scholars and researchers of higher education who explore all aspects of human knowledge — is the difficulty of achieving the unity of knowledge and the reconciliation of the universal validity of reason and our understanding of the diversity of social and cultural experiences. The challenge calls for integrating and resynthesizing the compartmentalized knowledge of disparate fields: the ability to make connections among seemingly different disciplines, discoveries, events, and trends and to integrate them in ways that benefit the commonwealth of learning.”

In his blog he champions the value of creativity in the education process. His thoughts support the type of education we are trying to bring to students in the communities where we work. Read the full story here:

“We live in exciting, exacting, dizzying times. Science has expanded the horizons of our knowledge of nature, while the limits of our physical world are no more the boundaries of our earth. Outer space is merely one of many frontiers that beckon the human imagination. We have sped from the Industrial Revolution of the 19th century straight on to the much-vaunted Information…Should we be alarmed at the pace of change, at the inexorable, massive growth of knowledge and facts, at the speed with which our tools to manage and process all of that become obsolete?” 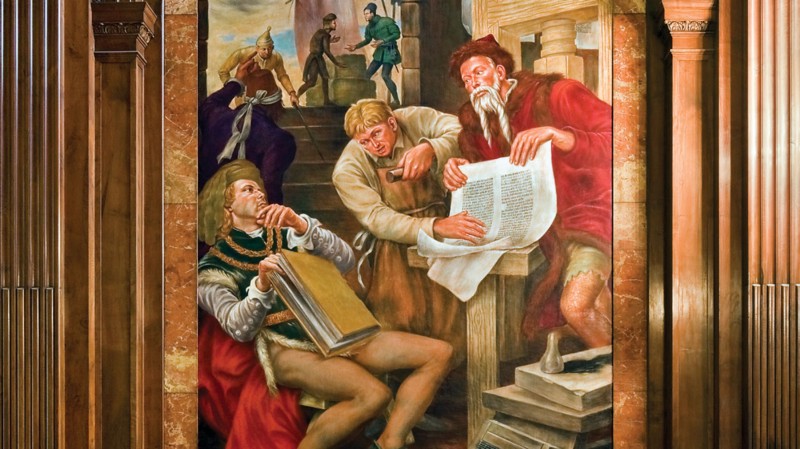 Gutenberg’s Triumph — Comprising nearly 1,300 pages in two volumes, the famous Bible of Johann Gutenberg (ca. 1390s–1468) is the first substantial book printed from moveable metal type in the West. Probably completed between March 1455 and November of that year, Gutenberg’s Bible is arguably the greatest achievement of the second millennium. In this mural by the American artist Edward Laning (1906–1981), Gutenberg shows a proof to the Elector of Mainz. The Gutenberg panel is part of Laning’s mural cycle depicting “The Story of the Recorded Word,” painted under the auspices of the Works Progress Administration (WPA) for The New York Public Library’s landmark building at Fifth Avenue and 42nd Street. (Photo: © Steven Brooke Studios)