Home » From the Field » In the Classroom in Huadhua 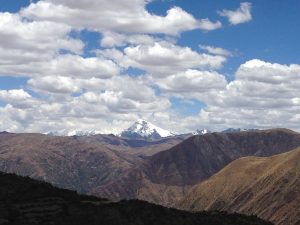 After 3 hours of driving through the mountains, we arrived at Huadhua, a remote town with 200 residents. As our white pick-up approached the school the children began to scream with excitement. “Gringo, Gringo!” rings through the air as the children eye us with bewilderment and curiosity. The kids, who are timid at first, scatter as we approach, but within minutes they are chasing us, playing soccer with us, and demanding that we lift them high into the sky. With their contagious energy, the kids draw us into 30 minutes of schoolyard recess, after which Phil and I are exhausted by the altitude.

As mid-day approaches, the kids begin towards the town hall, where Alma holds its after school program. Naturally, the children, all 30 of them, pile into the back of our pick up truck, Phil and I are forced to double up in the front seat, as we were late to arrive to the pick up. After a two minute drive, we arrive at the town hall. The children scramble towards the door and scream, “Professora!” while waiting for their teacher to arrive. The boys begin to roughhouse; they thoroughly enjoy bothering Phil. Once in class, the children take their places around two wooden tables and sing a song in their native Quechua. Afterwards, several girls come to the front of the class to sing Spanish songs.

The lesson for this week is about communication. The children are put into groups and tasked with writing brief stories that include various objects in the classroom. Two of the groups work well together. We were impressed by their ability to write in both Spanish and Quechua. The two other groups, comprised mostly of young boys, were more interested with Phil and I than with their stories. The teacher had trouble keeping them on task. Boys will be boys, no matter where you find them. After an hour of writing, the groups presented their stories. The class seemed especially timid with us in the room, gazing at use after every sentence to gauge our reactions, as if we were a foreign species.

Once presentations finished, the kids were given laptops to build powerpoint presentations describing the link between storytelling and communication. The stark contrast of the brand new laptops in a village with fewer lightbulbs than residents was striking. Nonetheless, to see these children building their slide decks was inspiring. This was an opportunity that the children would not have had without Alma’s support.

After three hours of singing, story-writing and computer use, the session ended. In the next class, the children will present their findings to one another. Phil and I said our goodbyes, embracing the children and giving our final piggy-back rides, and then we hopped into the van and rode to back towards Cusco.

The children of Huadhua are energetic, curious, and quick-to-laugh. As we watched them and interacted with them in the class, it became clear that each child was brimming with potential. Unfortunately, it was also clear that these kids had rarely been taught to think critically. While terrific in their handwriting and memorization of songs, the kids struggled when faced with high-level exercises, such as structuring a story, or finding links between different concepts. These more ambiguous tasks often led to confusion or disengagement. Alma’s project in Huadhua aims to help children develop these skills. Although Alma’s project faces significant challenges, such as a large student to teacher ratio (30:1); large variance in student age (3-16); and the structural issues that arise with the implementation of a new program in a remote community, it is evident that this project is poised to create impact in the lives of these children, their families, and the community as a whole. 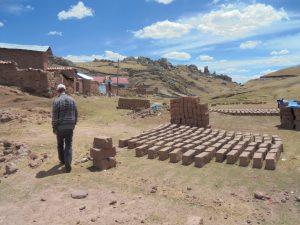