Home » From the Field » The Road to Huadhua 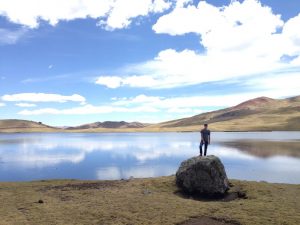 We headed out for Huadhua in the morning, aiming to cover 4000 feet of elevation gain in time for lunch at school with the kids. I had no idea how rich with sights – and learning from Ian – our trip would be. As we passed through the towns outside of Cusco, Ian told us about how each town we passed through had a particular specialty – Saylla for chicharrón, a delicious, fried pork dish; Tipón for cuy (guinea pig), the Peruvian delicacy; and Oropesa for breads (which unfortunately I didn’t get to sample).

Once through the smaller towns outside of Cusco, we passed the Incan walls and gates which delineated different districts of the old empire, and seemed to have acted as a gateway to Cusco. We then stopped in the town of Quiquijana to pick up coca leaves – Ian knows an abuela in Huadhua who loves the treat for making tea. This turned out to be helpful for me too, as we continued gaining elevation on a long, winding, and now one-lane dirt road for over an hour to reach the community.

On our way up the mountains, Ben and I remarked on horizontal lines cutting across the cliffsides around us – were these a geological phenomenon, or some kind of vegetation? It turns out that no, these rough horizontal lines, which striate the mountainsides outside of Cusco, are rough terraces hewn out of the soil, cut for potatoes which are planted thousands of feet up the bare mountainsides. The families of Huadhua plant their potatoes on these awe-inspiring terraces.

At lower elevations, we drove past stubborn donkeys who wouldn’t move for our truck – in Quechua they are called asno, which funnily enough is also an adjective used to describe a stubborn person. I find these idiomatic similarities kind of reassuring. Higher up, there are only alpacas, which eat the cactus grasses that grow at higher elevations/ They are worryingly skittish and tend to panic and jump out in front of you as you’re driving. I found this a bit concerning given that we discovered our rear brakes were no longer functional around halfway up the road to Huadhua.

As we neared Huadhua, first Ausangate, the massive glacier peaked mountain to the north, and then eventually Huadhua Laguna, came into sight. The lake itself is beautiful – it is home to a variety of ducks, their quacking responsible for the name of Huadhua (think quack-quack), as well as Andean geese, which are quite beautiful and mate for life. The earth here was covered by small cactus grass, the sun was brilliantly bright, and the peaks surrounding us remarkably craggy, sometimes dyed red by iron. Glacial erratics dotted what seemed increasingly to me a kind of moonscape – I had never been anywhere like this, and was amazed as we arrived in town, the first car to pass through this week.

Huadhua itself is a community of about 30 families. They live in mud-brick homes, with thatched roofs, and subsistence farm the sprawling, dramatic land that spreads out from their isolated village. There is no running water here, and electricity has recently arrived – most homes have a lightbulb, now. I want to leave our experience in town to Ben – this was the deal we made. The last thing I’ll mention today is just how hard it was to get going again – not only did the road down seem a bit long, but we had to somehow get about fifteen excited kids out of the pickup. This is easier said than done.