Home » From the Field » Sleepless in Bolivia 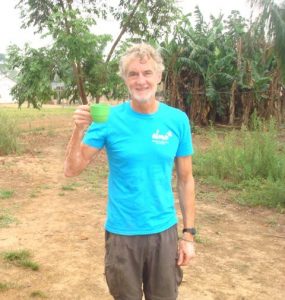 It’s day one in Bolivia and already I feel like I’m in one of those Garcia Marguez novels where time stops and sleep doesn’t necessarily happen.

My one and only day in Lima started at 1AM when I arrived but my taxi driver didn’t (he had fallen asleep in his car at the airport parking lot) meaning I didn’t get to bed until 3AM then up at 7AM for a day of fundraising meetings ending at midnight followed by a 5AM flight to La Paz Bolivia and then another flight on to Trinidad in the jungle region.

In La Paz I visited our long time partner Sariry and as always was struck by the dire conditions in which the children live in this part of the city. I was still feeling jet-lagged and tired when Elisa (the founder and Alma Bolivia board member) woke me up with the story of her newest kids. They are a family of four kids, ages five to eleven being raised by their mother in a one room shack with no water, toilet or electricity. The mother is away for three or four days at a time selling fish in another city to make money to feed the kids. So essentially the four kids are raising themselves. When the oldest two leave the “home” they lock the youngest two in the shack for safety. That’s when I stopped feeling sorry for myself.

Here in Trinidad on our first evening we had a teacher training session. The teachers from our four communities within a five hour drive came into town for the session. Our teachers all live in the communities where they work but none come from those communities. Most are from Trinidad. For them to leave communities where no one owns a car and make their way here to “Trini” then back to their communities is an ordeal that few Canadians would understand. The dirt roads are often washed out and the first leg is usually on the back of a dirt bike offered up by someone in the community. Because everyone in the communities supports our projects they will do everything possible to keep our teachers in the community and happy. Once they make it to the “highway” they usually arrange a ride in a private minibus or find a ride with anyone related to anyone who knows anyone with a vehicle. Once in Trini they need to have someone to stay with. So the investment they make to attend the training sessions is a big one.

Trinidad itself is how I picture a Garcia Marquez town – a little surreal. From in the plane one sees trees, muddy rivers and smoke. Smoke because they always seem to be burning tracts of the rainforest to “settle” land and plant crops (more on this in future blogs). In the city I am struck by the heat, noise and dirt. We are clearly in the lowlands of the jungle (from the high altitudes – 12,000 feet – of La Paz) and in a place where motorcycles (dirt bikes) constitute 90% of the traffic and 4by4 pick-up trucks most of the rest.  These small to mid-size dirt bikes weave in and out of the traffic, no one wears a helmet and entire families with as many as five people ride on them. A standard load is two adults with two small children tucked between them. I have been here three times now and I still am shocked to see mothers with babies in their arms riding on the back of dirt bikes.

Outside of Trini is nothing but savannah, jungle and the very small communities (10-150 people) in which we work. Some of these communities are new, settled by people coming from the highlands and essentially given land by the government (there are several competing explanations for why this is), and many are the result of families initially employed on cattle ranches (“estancias”). The indigenous people who make up the largest portion of the population with whom we work are Mojinos. The history of the indigenous people here is interesting because the latest research suggests that some of the first civilizations in South American were in this area.

It is the dry season but when it rains it rains! The rain comes on quickly and pours hard. In the rainy season several of our communities are inaccessible, others can be reached by boat (11-13 hours in a very small tin boat) but I always time my visits to avoid the rainy season! Tomorrow morning we set out at 3AM on the long drive to our first community. We work in seven remote communities and over the next five days we will spend time in all of them and overnight in a few of them. 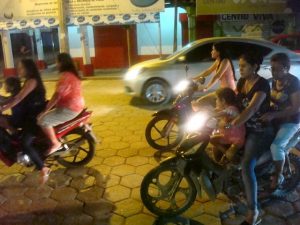