Home » From the Field » Strike Shuts Down Cusco 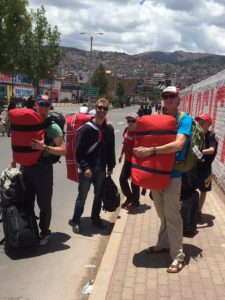 At the airport in Toronto we got news that Cusco had been shut down by a general strike: everything was closed and the roads were to be blocked for the next 2 days. President Ollanta decided to privatize the management of the archaeologic sites in Cusco province which upset everyone in this part of the world. We weren’t sure what to expect but when we arrived, sure enough, the roads were blocked and no vehicles were running. So we gathered up our bags including three, 80 pound hockey bags full of soccer shirts and soccer balls and began walking to Ian’s apartment. The apartment was only a couple of kilometres away, and we only had to cross one police barricade, but the walk with all that luggage at 10,000 feet of altitude and a bright hot sun was absolutely killer. Until I started to think of the porters on the Inca trail who RUN with packs like this in flip flops! As we passed cuscuenos in the street, many asked us where we were going, and if were you lost. They could not provide transport but obviously felt bad and wanted to at least give us directions. It took about an hour to make it to Ian’s place and another hour of water and coca leaves to get over our hike. 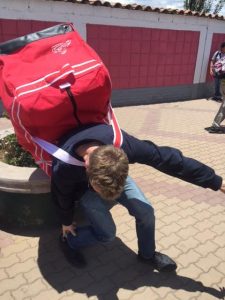 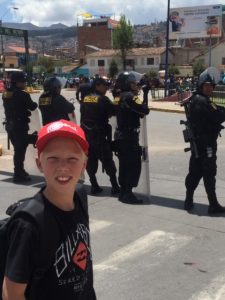