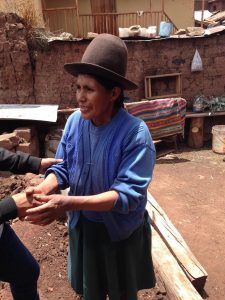 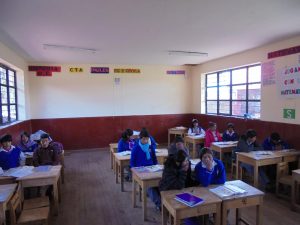 Today Phil, Octavio and I headed towards the Valle Sagrado to visit three villages where Alma has operated for the last few years. The projects have all finished this year, so our goal was to evaluate the effectiveness of the projects and meet with the children who participated.

Our first stop was Patabamba, a relatively developed town about two hours out of Cusco. Alma’s project here focused on providing additional classes in math and communications in order to increase the number of students who attend university. We went straight to the school to speak with the teenage students who had participated in the program. When we entered the first classroom, we were greeted with a standing applause. After introducing ourselves, we began to ask the children about their experience with Alma. They spoke highly of the program, and how the style of Alma’s program prepared them for the difficulty of higher-level studies. Although the children were timid, there were several who were eager to tell us about their experiences.

In the second classroom, we entered to a similar greeting. As we began to question the students, I noticed an infant in one girl’s lap. Halfway through our questions, the child began to cry, and the girl, who could not have been older than 14, began to breastfeed her daughter. I was shocked to see that this was commonplace in the classroom. Being an attentive student is difficult. Walking 90 minutes to class is strenuous. To do these things while caring for a newly-born child is absolutely mind-boggling. This event was a looming reminder of the opportunities that I have taken for granted while growing up in Toronto. Each of these children are resilient beyond their years.

After speaking privately with each of the children, we walked back to the car. On the way, we stopped at the house of Josè Luis, a graduate of Alma’s program who is now attending the University of Lima. His mother greeted us warmly and invited us to eat lunch with her. Her gratitude towards us, three strangers, was almost jarring.