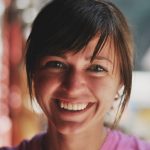 If you’ve noticed that we’re much more active on Facebook and posting blogs a lot more regularly these days, it’s because we’ve got a fantastic volunteer helping us out!  Olga Melnikova joined the Alma volunteer team last year after hearing about us through a friend.

Here’s what Olga had to say when she asked why she wanted to help Alma:

“After spending several years in London working in the IB division of a global financial institution, I decided to take a year off to travel, learn and explore the world. I started my travels in Latin America and fell in love with the culture and people I met.

Peru was a very special place that I always wanted to visit and it was truly a magical experience. After travelling to Lima and Cuzco, I ended up in Iquitos. From there I went deep into the  jungle to a small village called Jenaro Herrera. The only way to get to Herrera is to take a bus to another local village and then a 3 hour boat ride on the Amazon river. Life in that region is very simple – most people don’t have water or electricity in the houses.

What amazed me the most were the children. These were some of the happiest children I have ever met, despite complete poverty and lack of toys. I knew that people in that village don’t have much, so I brought chocolate and some plush toys with me. Little did I know that the best present for the kids were actually pens and paper, because with that they could write, draw and create things!

All of them wanted to learn English and I was touched by their eagerness and desire to learn. Later I found out that these kids only attend school for 6-8 hours per week, since there was only one teacher in that region and he travelled between three villages.

Once I came back to Canada, I discovered Alma through a friend. Alma’s projects not only make education more accessible to children in Latin America, but also encourage and empower local communities to change the way they see education of their children.”

We’re so grateful to count Olga as one of our volunteers and ambassadors – thank you for your dedication, Olga.