The Cultural Centre “Cuarto Creciente” opened in Urubamba in 2012 as a space for theatre and other creative and cultural workshops. Here, children, young people and adults can investigate, explore, share, learn and find their own talents, abilities and qualities. It has a philosophy of positive stimulation and aims to help people become more rounded with respect for the difference between individuals.The directors of the centre, Nino Mirones, and Jane Lundholm, who take their story-telling and theatre to communities all around the Cusco area and further afield, are very keen to make the centre available to people from all walks of society, but it is new and currently has very little income.

Over the summer vacation of 2012 (January-February) the centre is offering a course of vacation workshops, for which Alma is sponsoring bursaries to six children from families who would not be able to pay the course fee. The children, aged 5 to 13, learn art, music and theatre and have the opportunity to and act in a short play at the end of the seven-week course. Three of the children with bursaries are from the children’s home Mosoq Runa, with which Alma is working closely. The mothers of two of the others sell goods in the local market. 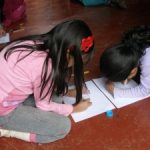 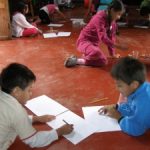