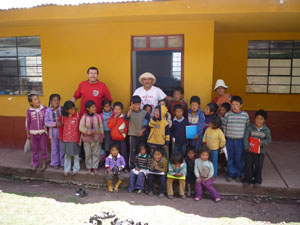 In response to the large success of our project working with the families of school I.E. # 50908 in Chamana, the Alma Foundation has decided to implement the same project, though slightly adapted due to the different needs of the new communities, in the school I.E. # 501316 in Markuray.

The project includes the 23 families from Markuray and Rayan who send their children to primary school in Markuray. Both are very small and isolated communities are only accessible on foot, located high above the valley community of Pachar within the District of Ollantaytambo. Like the five participating communities in the Chamana project, this will be the first time any NGO has worked in Markuray or Rayan.

Academic Performance: Student grades from 2012 will be compared with 2013 in order to measure the academic impact of the project.

Income: At the beginning of the project, participating mothers will fill out a survey of average household income. This will be repeated one year later, in order to measure the financial impact of the project.