Home » Projects » For My Friends

For My Friends was founded by two University of Toronto students with the aim of financing the education of Peruvian children at Colegio Senor de los Milagros in Lima. Parents within this community are often unable to afford both the enrollment fees and the cost of school supplies. This means that their children are unable to receive a basic primary education. Working together, Alma and For My Friends intend to remove this financial burden to ensure that the children are able to attend this school. Each year, For My Friends will raise enough funds to send five children to school for nine full years of primary education. This includes three years of kindergarten, plus grades 1-6. These scholarships will be provided each year, based upon the children’s attendance at the school.

The second phase of this project will focus on improving the physical environment in which the children are taught. Over the next five years, this will involve the cleanup of the schoolyard, removal of harmful debris (dead animals, garbage, wood and metal scraps, and glass), upgrading the existing playground equipment, and establishing a small library for the school.

The third phase of this project will involve hiring a full-time English teacher at the school.

This project began when 19 University of Toronto students traveled to Lima to volunteer at a primary school. From the first day there, the group members were affected by the poor state of the school in comparison to their childhood experiences growing up in Canada. Volunteers noticed children playing with rocks or in the dirt, amongst garbage and scraps of building materials. The limited playground equipment was in dire need of replacement. The highlight of the school for many children involved showing volunteers the “gato muerto” around the back of the kindergarten class, which the Canadian volunteers discovered was a dead cat. The school consisted of six classrooms in poor condition. The children were observed pulling the plywood from outside the structures to reveal the insides of classrooms. Perhaps most striking was the absence of a basic library.The young Canadians were moved by the dedication of the teachers, who encouraged parents to invest in teaching materials for grade school and toys for kindergarten classes. When parents could not afford to pay, the teachers would spend their own wages to buy the materials. Despite the conditions, the children were vibrant, playful, and extremely excited about welcoming the U of T group to the school. Volunteers and children bonded almost immediately. A particularly strong connection was formed with a small, three-year old boy named Pablito.

Pablito was found crying on the first day because he was hit by a soccer ball. His brother held his hand as he walked Pablito to the public health classroom. One of the Canadian founders of this project became instant friends with Pablito.Pablito’s two favorite activities were to go down a slide in the kindergarten complex and to have his arms and his legs, which were covered in dirt, washed at one of the sinks. As the volunteers got to know Pablito, the kindergarten teacher told them that his family could not afford to send both Pablito and his brother to school. Instead, Pablito was left alone all day at home, while he waited for his brother to return from school. One of the volunteers was touched and sought out the director of the school and the boys’ parents to find out if it would be possible for her to pay for his enrollment fee and supplies. Now Pablito attends the school along with his brother.

On Pablito’s first day at school, the volunteers found a completely different boy. With a smile on his face, he proudly showed off his clean socks and boots that replaced the ring of dirt around his ankles. He slowly made friends with other little boys and girls, instead of staying with the volunteers, and, encouraged by the teachers, he became more talkative.      Seeing such a change in one little boy has inspired the founders of For My Friends to continue to improve the lives of other children in the neighbourhood by providing them with a chance to attend school.

The U of T students approached Alma with this wonderful story of their engagement with the primary school in Lima. Alma’s representatives have been moved by these young Canadians’ attempts to help clean up the schoolyard, their purchase of school supplies, and their initial financial support of several of the school children. Alma will be helping the U of T volunteers to expand their support into a long-term commitment to the school and its pupils.

The For My Friends crew from UofT spent two weeks at the school in August and have slightly modified the project. 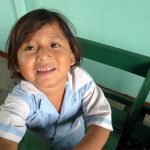 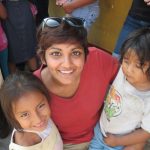 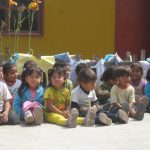 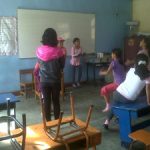 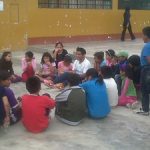