In general, arts and crafts can provide a vocational education, and, thus, an income; skills in weaving and jewelry making are particularly useful. The Tejidos Andinos Project currently works with a group of 30 students; however, many more are waiting for the opportunity to be included. Andean weaving is an art form that these children can identify with and feel competent working in. We aim to integrate the young people from the community into the project by helping them become ‘Yachachiq’ (Those Who Teach). By doing so, they become leaders in their own right, with a sense of self-worth, while passing on a traditional skill to their urban brothers and sisters.

Another aspect of the program concerns segregation. By integrating Indigenous children from the mountain villages with the primarily Mestizo and Spanish town children, we are helping to eliminate the antagonism that exists between these groups. This is achieved by giving these marginalized students financial recognition (on sold products) and, in turn, providing them with a better home life. This is fundamental because when the indigenous students from the highlands come into town, they are often mistreated by their host families. With a few extra soles that they have earned, they can at least be certain of enough food to eat. In addition to this, educating the highland youth helps them to become knowledgable leaders. This will have a dramatic, positive effect on their self- esteem and their appreciation for the school environment.

Currently there are three teenage girls from Huelloc being paid to teach the after school tejidos pilot project. Full-time teachers have noticed an immense change in the students’ attitudes towards these girls, and the program is gaining in popularity. The impact on the three girls has been dramatic: they are more confident, their popularity has risen, and their academic scores are improving. The impact in their village has also been exciting. Not only has their employment helped to reduce economic hardship, but the example they are setting has motivated more young people to come down to the school and participate.

Based on the success of the pilot project, the program will be launched on April 10, 2011. The project team consists of Professor Rosio (the arts teacher at GOU), Isaac Humam (President of the Parent Association and a Community Leader in Huelloc) and David Librado (Alma Program Director). Initially the classes will be taught by the same three girls (Alesia, Maria Teresa and Elisabeth) and it will be offered to 30 students. In 2012 we hope to employ six student-teachers and two part-time adult teachers and have it incorporated into the regular curriculum. Indirect beneficiaries will be the 760 students at GOU and their families along with the community of Huelloc (200 people).

We are grateful to the charity “forgirlsake” for their financial support of the Tejidos Andinos project.

The students have been learning to hand spin sheep’s wool and to weave simple, narrow belts of various colours, with synthetic wool, which is easier to handle. As well, they are beginning to re-spin alpaca wool to weave with. Several students are starting to weave wider belts. Some 36 students have registered for the course; however, not all of them attend every workshop.

The student-teachers — the yachachiq — are paying for their accommodation and meals with money that they earn by teaching their fellow students to weave.

Our support ended in August as the school was no longer supporting the program. 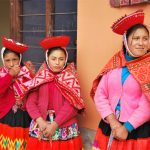 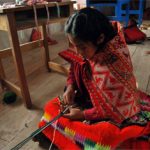 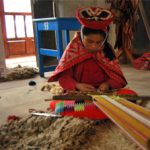